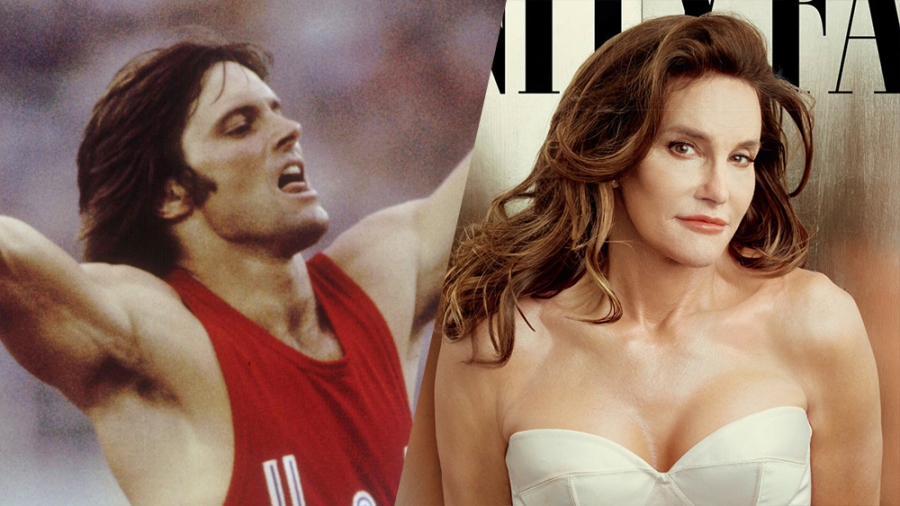 Caitlyn (fka Bruce) Jenner is a former American Olympic decathlon athlete who won the gold in 1974.  Since 2007, he has participated in the popular reality TV show, Keeping up with the Kardashians.  On April 24, 2015 Jenner participated in an interview on 20/20 where he publicly came out as a transgender and detailed his historic struggles with gender identity.  It was also during this interview that Jenner revealed that he had changed his name to Caitlyn.  Bruce/Caitlyn’s chart below:

The most immediately noticeable characteristic is the preponderance of planetary bodies to the left side of the chart.  This dynamic reflects an individual who is focused on themselves as opposed to others.  This doesn’t necessarily indicate selfishness, but just that there is a general concern on the self.  Astrologer Noel Tyl has often categorized this dynamic as “defensive” or “protective”.  The focal point of this dynamic is Jenner’s Sun rising (i.e. Sun conjunct ascendant).

The ascendant is the most powerful of the four angular house cusps and planets positioned here have a tendency to manifest more prominently than others.  The ascendant represents the image we project externally to others, our first impression, and quite literally, our general appearance.  Since the Sun represents the ego, life force and core essence, issues of appearance and image tend to strike to the very core when the Sun is positioned on the ascendant.  The Scorpio quality shows how the individual may be concerned with transforming their image in some manner.

The Sun is forming a tight (within 11 minutes of exact) trine aspect to Uranus, which is positioned in the 9th house and in the sign of Cancer.  The 9th house represents areas of expansion, Uranus represents the archetype of radical change and Scorpio and Cancer are both feminine signs.  These initial clues offer a bit more specificity of the broad theme offered by the rising Sun.  They show that Jenner’s inner motivations to change her appearance will easily support (trine) her need for radical change (Uranus) as a way to experience growth and expansion (9th house).

Cancer is ruled by the Moon and Jenner’s Aquarian Moon is in square aspect to the Sun.  Square aspects between the Sun and Moon carry the highest priority because they represent our archetypal cores; namely, the ego and emotions.  Conflict between them often hints at a deep disconnect or dissatisfaction and is a constant source of irritation often forcing drastic action[1] in order to address the friction.  Essentially, Sun-Moon square individuals don’t necessarily feel comfortable in their own skin.  For Jenner, it may reflect her discomfort (square) of feeling (Moon) different (Aquarius) as a result of a purpose or life goal (Sun) that involves changing her appearance and ego.

Venus in the 2nd

So far, the archetypal characteristics hint at a damaged sense of identity.  Since this has obvious negative implications on the self-esteem, the 2nd house needs to be evaluated as it represents what an individual values, which includes their self-worth.  For Jenner, Venus’ placement here shows the importance of exploring (Sagittarius) feminine activities since Venus is the fundamental significator of the female archetype.  This importance is further amplified due to the fact that it is the most heavily aspected planet in the chart:

The final piece of evidence of this picture involves the nodal axis.  The nodes of the Moon represent the intersection of the path of the Moon with the path of the Sun.  The two points are 180 degrees apart.  The north node is thought to represent an evolutionary goal for the individual, while the south node represents the qualities already learned that can be leveraged to assist the individual with becoming what the north node represents.

Jenner’s north node is placed in the 6th house and within the sign of Aries.  Her goal involves cultivating courage and assertiveness as a trailblazer and hero (Aries) in the service of others (6th house).  Her south node is conjunct the Mercury-Neptune alignment referenced previously[5] and the conjunction with Neptune is within minutes of being exact.  Jenner has successfully embraced her hidden feminine idealizations, transformed her identity, and in doing so, became a hero for others.

This is the common refrain of critics of the LGBT community.  By characterizing their lifestyles as a choice, they are inferring that it is not inherent, innate or natural.  In other words, the individual is making a conscious choice to live a life that is unnatural.  By extension, if it is unnatural then it may also be immoral, wrong or an “abomination”.  The problem with this logic is it assumes the inner workings of an individual without any direct observation.[6]  Without seeing inside the person, how can we ever be certain that they aren’t who they say they are?

Astrology provides this insight and while archetypes contain a range of specific manifestations, their unique blend of archetypal themes can paint a compellingly detailed picture of an individual.  For Caitlyn Jenner, it reflected an ego intimately defined by physical appearance and yearning for transformation as a means of growth and expansion.  It showed a strong affinity with the female archetype, but that this affinity was hidden behind the scenes, rejected by society and resulting in a damaged sense of self-worth.  Finally, it showed that embracing femininity as a means to transformation would bring a degree of notoriety as well as assist the individual with their larger, lifetime goals.

Taking all this into consideration, it is hard not to view these themes as a destiny[7].  Like Jenner, we possess a will to modify or suppress their expression, but to the extent that it doesn’t harm or violate the rights of others, exactly what is being achieved?  Sometimes the only choice is acknowledging and accepting the fate of identity and striving towards its most harmonious expression of actualization.

[1] First quarter squares (i.e. 90 degrees as opposed to 270 degrees) are usually the most active because the sense of discomfort is the most acute.  The individual feels that they must do something, anything in order to address the inner crisis.

[2] While the dynamics within a chart represent the individual’s perspective of those dynamics, it should be noted that those perspectives are usually worth exploring as they didn’t arise in isolation.

[3] Jupiter’s rulership of the 2nd and debilitated status in Capricorn is further evidence of a weak or damaged sense of self-worth.

[4] Transformation is the dominant theme in Jenner’s chart and Mercury provides more evidence as it rules the 8th house transformation and is conjunct the Venus-Pluto midpoint.

[5] Many astrologers believe the south node represents the karma or experiences from a previous life time.  While this is impossible to prove, Jenner’s dynamics could infer the wild possibility of a recent prior incarnation as a female.

[6] The same can be concluded of those who accept LGBT lifestyles or identities, but at least they defer to the individual as the source of truth when making judgments as to the legitimacy of their identity.

[7] What is referred to as free will can translate to a freedom from external circumstances or pressures working against an individual’s desires or personality, but it doesn’t always mean freedom from the latter because this would infer that there is no central, unique core.  This is where the concept of fate could be plausible.

One thought on “Caitlyn Jenner”