Donnie Darko is one of the more challenging and cryptic movies released over the past 20 years and has become a modern day cult classic because of the plot’s open-ended structure.  I’ve often believed that these types of films develop a “cult” following because the plot’s indeterminate interpretation only finds appeal within a small, minority who challenge themselves to explore the possibilities and underlying connections or themes.  As a movie, Donnie Darko is much like an optical illusion picture, where the viewer can see two different images (or themes) depending on how they look at it.

Basically, there are two possible plot themes.  One revolves around Donnie’s journey to close the epicenter of a parallel universe that originated in his bedroom and the other is based on the deterioration of Donnie’s mental health due to a potential diagnosis of schizophrenia.[1]  In the first option, Donnie could be described as a heroic martyr because he kills himself after closing the parallel universe, thereby saving reality.  In the other, he is a victim suffering with the symptoms of mental illness.

From an astrological perspective, this movie offers another very precise example[2] of timing because the epicenter of this parallel universe occurs at exactly midnight of October 2, 1988 in Middlesex, VA.  With this date, time and location a chart can be constructed to delineate the story.

The Ascendant is usually a good starting point for any astrological evaluation because it is the part of the chart that projects itself outward most visibly.  The fixed star, Sirius, resides around 14 degrees Cancer, so while it may not be visually represented in the chart above, for all intent purposes it is conjunct the Ascendant.  In previous articles, fixed stars were covered only briefly because there are only a handful of them that have been shown to impact delineation with aspectual relationships usually isolated to only very tight (1-2 degrees) conjunctions.  Regardless, fixed stars tend to manifest strongest when positioned on an angle so Sirius’ presence on the Ascendant, the most prominent of the four, immediately draws our attention.

Sirius is one of the more powerful fixed stars known to ancient astrology.  If focalized, its presence can result in tremendous benefits, but its influence can also lead to extreme actions that can result in the individual hurting themselves in the process.  According to astrologer, Bernadette Brady, Sirius shows:

…that the small action of the individual has a large effect on the collective.  The individual, however, may be sacrificed to this collective expression.[3]

Since Donnie is the main character of this story, he would be represented by the Ascendant (and its ruler, the Moon).  At the end of the story, Donnie successfully sends the duplicate artifact (i.e. jet engine) back through the portal of the parallel universe, allowing that universe to collapse safely, thereby preventing the creation of a black hole that would destroy all of reality.  In doing so, these actions sent him back in time to the moment before the jet engine crashed into his room.  But this time, instead of escaping the room, he allowed the engine to crush him.  Many critics have interpreted this decision as a sacrifice.  In other words, Donnie had fulfilled his purpose as a living 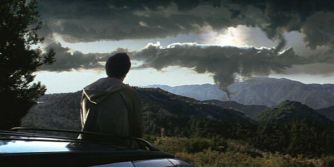 receiver and decided that there was no reason to continue existing.  As a result, this is ultimately the story of a martyr and fits nicely with the dynamics most immediately represented by the affiliated chart: the role of Sirius.

The grand cross is one of the strongest configurations for conflict, hardship, pressure and stress and has been covered extensively in prior articles.  In the analysis of Bill Maher’s chart, the correlation was drawn to Bill’s confrontational nature.  In the Rumble in the Jungle article, it was identified as a major contributor to the development of Ali’s “rope-a-dope” boxing technique and an underlying foundation for his inherent nature to withstand pressure and punishment.  With James Earl Jones, it was representative of the hardships and torture that broke Anakin Skywalker and transformed him into Darth Vader.  Similarly, with Bryan Cranston, it symbolized the massive conflict and pressure that transformed Walter White into the criminal drug lord, Heisenberg.  With Donnie Darko, it represents the plot’s core conflict: Donnie’s (Moon) struggle (opposition) with becoming the martyr (Neptune) hero (Sun) chosen to save everyone from the fake (Neptune again) reality that coincided with the arrival of the artifact (jet engine – Mars) crashing (square aspect) into his room (4th house Sun).  The correlations of this overarching configuration can be explored with a finer analysis of the following components:

Along with the Sun, Mercury is also positioned within the 4th house and at the midpoint of Venus, Saturn and Uranus.  All three planetary bodies are in aspect to each other, underscoring the significance of this midpoint relationship.

Mercury and Venus also happen to be “dual” rulers of the 4th house.  Mercury is the primary ruler of Virgo on the cusp and Venus rules the intercepted Libra within it.  This heavy focus on the 4th solidifies the “home” theme referenced in the grand cross and Mercury’s retrograde status further echoes the theme of something “returning” to the home.

The aspects from the Saturn-Uranus conjunction are striking due to Saturn’s general association with the archetype of reality and Uranus’ with chaos, disruption and alternate ways of doing things.  The conjunction can be delineated, quite literally, as an alternate reality affecting the home.

One of the interesting quirks of this movie is that the main plot has an alternate interpretation: mental illness.  Many critics and mental health professionals have noted that Donnie exhibits many of the textbook symptoms of schizophrenia and the multivalence associated with astrological archetypal symbolism accounts for this alternate interpretation.

Both the 12th house and Neptune have an historic association with mental illness.  According to the astrologer, Howard Sasportas, “Those with difficult placements in the 12th may ‘crack’ under the strain of life or fall prey to powerful unconscious complexes which erupt to the surface.”[6]  As noted earlier, the Moon’s placement here is particularly significant because “if the Moon is afflicted, there can be neurotic tendencies and loneliness; if heavily afflicted, institutionalization and confinement because of mental illness.”[7]  To this point, the Moon’s conjunction to Chiron reflects a type of emotional wound while the opposition to Neptune shows the struggle with delusion.

Ultimately, the chart doesn’t confirm which plot is real.  Just like the movie, it infers that it may all be in Donnie’s head.

Unfortunately, the vague and somewhat confusing plot structure also invites a lot of criticism and this isn’t shocking.  Much of the modern mindset is influenced by a mechanical paradigm that assumes all phenomena to be sequential and linear so anything ambiguous or less than straightforward tends to trigger discomfort or is discarded entirely.  Similarly, astrology tends to exist on the fringe because it also has multiple interpretations dependent on a plethora of combinations that are further refined by the manifestation potential of any individual’s “reality”.[8]

Despite the fact that 100% of all phenomena are not explained by physical laws that govern the visible, tangible world, the areas that are not governed by these laws (i.e. quantum levels, etc) can’t be readily accessed or experienced so it’s as if the challenge they pose to the prevailing paradigm doesn’t exist.  In other words, they’re not “lived in”.  As a result, their assumed scope of influence is somewhat involuntarily overestimated[9] making it easy to discount examples that are open-ended, multiple, context-dependent and/or spontaneously created without any preceding stimuli (creativity).

The founding fathers understood that there must be a balance between how we explore, practice and entertain that which isn’t entirely empirical while existing within a world that appears otherwise.  This philosophical framework was simplified into the concept of “separation of church and state”.  The thing is, this framework is an illusion because in

a democracy these two areas can never truly be separated.[10]  This is one reason why astrology evokes such a strong response from its critics.  In a world that accepts astrology’s legitimacy as second nature, without guidance or an appropriate degree of integration it is almost certain to be legislatively abused by politicians seeking power and money.[11]

So what would be an appropriate degree of integration?  On a personal level, would it involve electing when to schedule important meetings or submit contract proposals?  How about more significant events, such as electing when to buy or sell a home or the delivery of a newborn?[12]  On a macro level, would there have been value in advising the previous president against releasing the Healthcare.gov website within three weeks of an approaching Mercury retrograde period?  What about warning the current president of the approaching risks to the economy due to transits to the United States’ “natal” chart that haven’t occurred since the recession of the early 1990’s?[13]

For those who have more than a fleeting, casual curiosity, escalation is an unavoidable corollary to astrological exploration because it can inspire a complete existential reorientation, far removed from the truths we hold to be self-evident about the world in which we exist.  In this way, it isn’t too far removed from the metaphor that Donnie Darko provides.  It’s as if we are living in an alternate reality where astrology isn’t accepted and surrounded by “manipulated living” who think those that practice or study it are crazy.

[1] There are multiple websites available to assist with the review.

[2] In the article for the Terminator, we reviewed the chart associated with the timing provided by the film.

[4] Any planetary body beyond around 23 degrees of declination above or below the ecliptic is considered to be out-of-bounds.  This astrological characteristic augments the normal archetypal functions of the planetary body.  Here, the Moon is over 28 degrees above the ecliptic.

[8] Astrological archetypes adapt their manifestation to an individual’s “reality” similar to the way water adjusts its shape to its container.  Just as water never loses its elemental quality, archetypes also maintain their base nature despite the unique shape it may take when applied to the “shape” of any individual’s life.

[9] Laplace’s Demon is one of the earliest experiments developed to test the scope for this line of thought.  If all of physical phenomena are governed by laws that describe the relationships of specific variables, then we would just need to know all the qualities of the variables in order to predict the future.

[10] People vote their values which may be a reflection of their belief systems in order to elect representatives to enact legislation that supports these beliefs, which may or may not be entirely empirical.

[11] The Roman Emperor, Tiberius, is a good example of this.

[12] This goes to the very heart of this debate as the only way to precisely control the timing of delivery would be through a c-section.  I have wondered if India’s abnormally high c-section rate has any connection to the country’s widespread use of astrology.

[13] Transiting Saturn will go into conjunction with the US’ natal Pluto.